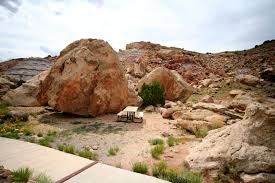 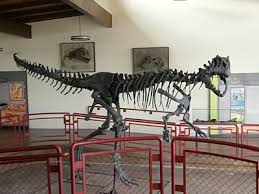 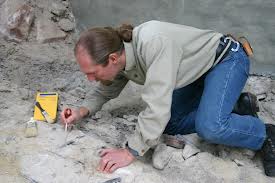 The Cleveland Lloyd Dinosaur Quarry is known for having the greatest concentration of Jurassic dinosaur bones on the planet. The bones were deposited in the Morrison Formation, a sand, silt, and clay rock unit which spreads out over 600,000 square miles and occupies parts of thirteen states, including Utah.

The sediments at the Cleveland Lloyd Dinosaur Quarry are thought to have been deposited by/in/as:

The photos above, and the professional opinions noted, should give you some indication of the environment the dinosaurs died in water–mud and water.

Experts are also divided on how the dinosaurs died. Many think they died from:

1) A drought, an evaporating lake predator trap, like the California tar pits, only with mud. In this scenario, some unfortunate herbivores got stuck in a muddy evaporating bog, and predators came to feast. Sadly though, over seventy of those big brutes got stuck themselves and died. There is a short piece written up on this in National Geographic, highlighting paleontologists Terry Gates and Sue Ann Bilbey. (http://news.nationalgeographic.com/news/2002/12/1220_021220_droughtdino_2.html)

2) A 1000-year flood event. Dinosaurs are swept up into raging flood waters, carried down-stream, and deposited on the quieter flood-plain. The bloating, floating, dead carcasses swirled out of the flood path into a crevasse splay and sank as a group. Soft sediment from the flood waters quickly buried the bodies with hardly a bite taken out (Mike Loewen, University of Utah, personal communication, October 2014).

3) A lethal spring. This is also a predator trap. Rising poisonous groundwater turns into a toxic briny spring killing those that drink. The smell attracts larger carnivores which subsequently get stuck in the wet, sticky, volcanic mud and die a slow, hungry death (Bilbey, 1998, 1999).

4) Fires destroying vegetation in large drainages. Without the protection of trees and grass to hold back and slow down the runoff after a hard rainstorm, what would have been a small flood event becomes a massive, torrential flood drowning all those too slow to get out of harm’s way.

5) Erupting volcanos. Similar to Mt. Saint Helens, volcanos erupt and quickly melt their glaciers, which in turn cause catastrophic flooding. These torrents catch, kill, and then deposit all those unfortunate victims.

There are problems with all these theories; each model has data that doesn’t seem to fit, but anyway you look at it, there was a lot of water, a lot of sediment, and a lot of death. Over 12,000 bones have been collected at the quarry and they are still digging.

We are told fossils testify to ancient life, and that is true, but they testify more clearly of death. There have been many mass extinctions recorded in the rock record and that’s one-way geologists divide rock units and time.

Two Theories Include a Catastrophic Flood

Did you notice at the top of the page that one or two of the geologically accepted and politically correct theories is a catastrophic flood?  The scientists mentioned above would not be comfortable expanding their theories to a world-wide scale, but they would admit to the possibility of having a flood be the causative agent in these animal’s death- floods capable of taking down huge dinosaurs, transporting them for miles, and burying them.

Isn’t it interesting that similar explanations are suggested in the Bible and other ancient documents? Maybe the Bible “legends” are not that far off from some of our scientific theories.