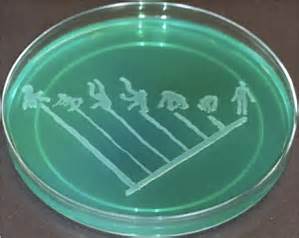 I just read a few journal articles with titles like: “Is humanity a failed experiment?” “Is Humanity Failing?” “Why is humanity failing as a whole?” and “Humanity is a failed experiment”. The thought that something has gone wrong in the universe, and more importantly that something has gone wrong right here, is not just an isolated, random, or outlier thought. Thousands, possibly millions of people think something has gone terribly wrong. But what happened? What has happened that society is so broken? Why do people murder, lie, cheat, and steal from each other?

In the naturalistic, big bang/evolutionary scenario, with its prime drivers—random chance and natural selection—humanity is not failing; it’s thriving; it’s doing exactly what it’s expected to do when a population increases to the point where there is an intense competition for resources. True its not the prognosis we’d like: a massive die-off at the end, like a bacteria culture that has consumed all the nutrients from the petri dish. The whole batch dies leaving only a few, only the toughest, only a few mutant-like cells that were a little more tolerant, a little more adaptable to the harsh environment than the rest of the herd; and they will live on, repopulating the dish with an improved genome until the cycle repeats.

In a natural selection scenario, competition encourages lying to survive, hoarding money and groceries and houses and resources to out-compete your neighbors. You can do anything and say anything; you can even kill to survive, and it’s not considered an unnatural or immoral act: it’s just natural selection. So the fights, the wars, and the troubles we see and hear are normal; it’s just the survival of the fittest. The riots, the drug abuse, the immorality, the cruelty and the resulting poverty are only the results of following the natural ways of evolution to select out an even better genome. Through it all, evolution should produce, an even better, stronger, more cunning, and maybe a more ruthless, smarter race.

The Bible, on the other hand, suggests a more sinister plot to our plight. Our social problems are not the results of natural selection merely, but rather the desperate consequences of a galactic war gone bad, a spiritual war between good and evil, and it’s being played-out right here on planet Earth. God was accused of lying about the results of rebellion in His universe. Satan insisted that God was lying when he said rebellion brought on death; and when the chips were down, Adam and Eve sided with Satan.

What happened that society is so broken? Our planetary representatives rejected God’s personal leadership, and we are reaping the results. Fortunately, God did not wholly abandon us to Satan’s influence—we have been given a choice as to whom we will serve and which principles we will follow. The question is: will we follow our Creator or something less?