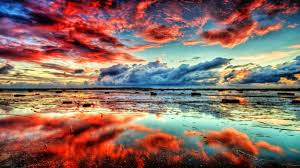 Jesus is not the Father, but He is God. God, the one we call Father, He is God. And there is one other, the Holy Spirit, He is God, too. The doctrine of the Trinity is still debated between churches, but it’s what I believe–there are three distinct beings with the same essential, eternal, timeless qualities. But what may be even harder for people to believe are Jesus’s words, “He who has seen Me has seen the Father.” (Jn 14:9; NKJV) Like the photo above, They are mirror images of each other.

How do we put those paradoxes on the same platter? It helps me when I consider two facts. First, it was really Jesus who led Israel throughout the Old Testament.

Moreover, brethren, I do not want you to be unaware that all our fathers were under the cloud, all passed through the sea, 2 all were baptized into Moses in the cloud and in the sea, 3 all ate the same spiritual food, 4 and all drank the same spiritual drink. For they drank of that spiritual Rock that followed them, and that Rock was Christ. 5 But with most of them God was not well pleased, for their bodies were scattered in the wilderness. (Emphasis mine)

The second reason we have a problem seeing Jesus and the Father as one, as having the same character, is, we have misunderstood the legal system as being punitive and not protective; and third, we have overlooked several other reasons why Jesus had to die. Jesus’s death was a demonstration, not an appeasement; it spoke to much more than merely a legal transaction.

In light of the great controversy between God and Satan, a controversy over God’s laws and character, God proved that He too was selfless and giving, that He loved this world, you, me, us, even though we had sided with Satan. He showed the universe what would happen if beings worshiped a god they were afraid of; which was demonstrated by the ruling Jewish leaders when they crucified Him! He demonstrated that He did not lie in the beginning when He said if we sin we die. His statement was not a threat; it was an undeniable fact, and He proved it, much to Satan’s shame.

Bringing God and mankind back together is atonement. Knowing what God is really like, knowing God is love and wouldn’t lie bridges the casum of distrust. Understanding that God loves us more than life itself and that the Father, Son, and Holy Spirit will heal and save all those who trust them again, is the atonement! And all three members of the Godhead are fully equal and fully on our side.

2. Others in the series 95+2 Immortality

3. Others in the series 95+3 Two Resurrections