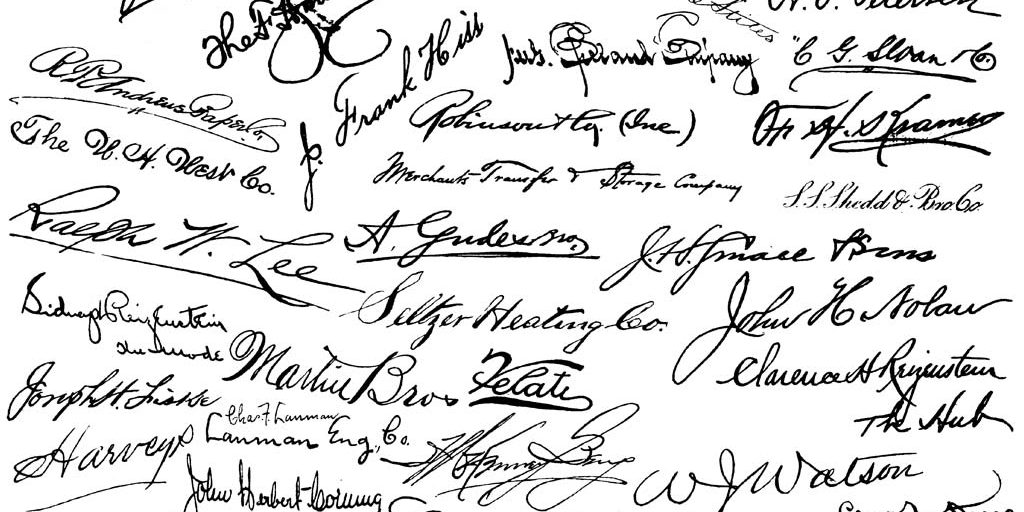 A few years ago, a colleague of mine had her signature forged while at work. Her was to visit oil well sites, the volumes of crude stored in the tanks, and certify how much oil was actually being produced and shippedto the refinery. And someone at the refinery was “cooking the books” then signing her name to the adjusted volumes. As you would expect, this did not sit well with my company or the company who employed the perpetrator, or the court.

The company was fined thousands of dollars and the evil-doer lost his job. Even in this digital age, our signatures are important, maybe even more than in the past. Now we sign documents electronically, verifying our approval, using two and sometimes three levels of security, guaranteeing that the signature is authentic. The US Government spends millions every year ensuring its “signature”, the dollar, isn’t forged. They use secret for its “paper”, (actually cotton and linen with red and blue fibers) and using inks that burn special colors making it easier to detect counterfeits. They even add 3D laser-etched holograms that printers can’t replicate.

Our Signature is our Bond

Our signature is our seal of authenticity, so to speak; it’s our bond, our word, our guarantee. When we sign something, we are staking our reputation on the results; we are attaching our character to the document. We have signatures, governments have signatures, and God too has a signature.

In the cosmic conflict between good and evil, God has at times placed his signature on events that he chose to specifically link to himself, events he chose to be significant, events that typify his character to make a point, like when he created the world, when he freed the Israelites from Egypt, when he toppled Jericho, healed the blind man, healed the man at the pool of Bethesda, and even when he rested in the tomb after his crucifixion, as if guaranteeing there could be no counterfeit, no fraud, no mistaking who was doing what. How did he do it?

Consider these examples from the Bible, first from the Old Testament, then from the New.

Exodus 31:13 “Speak also to the children of Israel, saying: ‘Surely My Sabbaths you shall keep, for it is a sign between Me and you throughout your generations, that you may know that I am the Lord who sanctifies you.

Deuteronomy 5:15 And remember that you were a slave in the land of Egypt, and the Lord your God brought you out from there by a mighty hand and by an outstretched arm; therefore, the Lord your God commanded you to keep the Sabbath day.

Joshua 6:15-16 But it came to pass on the seventh day that they rose early, about the dawning of the day, and marched around the city seven times in the same manner. On that day only they marched around the city seven times. And the seventh time it happened, when the priests blew the trumpets, that Joshua said to the people: “Shout, for the Lord has given you the city!

Ezekiel 20:12 Moreover, I also gave them My Sabbaths, to be a sign between them and Me, that they might know that I am the Lord who sanctifies them.

Ezekiel 20:20 [H]allow My Sabbaths, and they will be a sign between Me and you, that you may know that I am the Lord your God.’

Matthew 12:12 Of how much more value then is a man than a sheep? Therefore, it is lawful to do good on the Sabbath.” (Jesus)

Mark 2:27 And He said to them, “The Sabbath was made for man, and not man for the Sabbath. (Jesus)

Mark 3:1-2 And He entered the synagogue again, and a man was there who had a withered hand. So, they watched Him closely, whether He would heal him on the Sabbath so that they might accuse Him.

Mark 3:4 Then He [Jesus] said to them, “Is it lawful on the Sabbath to do good or to do evil, to save life or to kill?” But they kept silent.

Luke 13:14-16 But the ruler of the synagogue answered with indignation because Jesus had healed on the Sabbath; and he said to the crowd, “There are six days on which men ought to work; therefore, come and be healed on them, and not on the Sabbath day.” The Lord then answered him and said, “Hypocrite! Does not each one of you on the Sabbath loose his ox or donkey from the stall, and lead it away to water it? So, ought not this woman, being a daughter of Abraham, whom Satan has bound—think of it—for eighteen years, be loosed from this bond on the Sabbath?” (Jesus)

John 5:9-10 And immediately the man was made well, took up his bed, and walked. And that day was the Sabbath. The Jews, therefore, said to him who was cured, “It is the Sabbath; it is not lawful for you to carry your bed.”

John 5:16 For this reason, the Jews persecuted Jesus, and sought to kill Him, because He had done these things on the Sabbath.

John 9:14 Now it was a Sabbath when Jesus made the clay and opened his eyes.

Luke 23:56 Then they returned and prepared spices and fragrant oils. And they rested on the Sabbath according to the commandment.

Acts 17:2 Then Paul, as his custom was, went into them, and for three Sabbaths reasoned with them from the Scriptures

Acts 18:4 And he reasoned in the synagogue every Sabbath and persuaded both Jews and Greeks.

The Jewish leaders had a very legalistic view of the rules, including the Sabbath. Thinking they couldn’t do anything on the seventh day, they accused Jesus of wrong-doing when he healed and fed people; but the truth is, they were the ones in the wrong, not Jesus. They didn’t see that the 10-Commandment rules were all about love and serving one another. The healing of the man was completely in-line with the spirit of the law of love. All God’s “laws” are about how to love and become more loving, including spending quality time with him, our Creator and best friend.

If there hadn’t been a war in heaven, if Satan wasn’t trying to make God look bad to his creatures, and if Satan was not going to one day try to impersonate Christ and his second coming in an attempt to deceive the world into worshiping himself, then it may not have been necessary for God to identify himself with a specific day. But Satan has done all those things, and he will still do anything he can to discredit God and deceive his children.

It seems to me that God has endorsed his own actions. He has highlighted his greatest acts, making it clear that he did these things and that no one else can when he associates his actions with the seventh day. I look forward every week to resting like God did at creation and like he did after being crucified. Some friends and I get together and remember how many other awesome things he has done. And we thank him for it.